Over the last few years, research has established that meditation practice influences various aspects of our cognitive and emotional life in positive ways. It is exciting to see that such improvements also seem to be reflected in changes to the brain structure. Indeed, several studies revealed specific differences between meditators and non-meditators regarding cortical thickness, grey matter and white matter density. Exciting as these findings are, they cannot answer the question whether the observed differences are a result of meditation practice or are present for some other reason. Because they are derived from a simple comparison between two groups at only one time point, they do not inform about causal relationships. For instance, an alternative explanation would be that some specific feature that attracts people to meditation is also reflected in distinct brain morphology. It might well be, for instance, that the observed differences in brain structure were already present before these people engaged in meditation practice. Alternatively, they could be down to lifestyle differences or specific diets that meditators may follow.

Such alternative explanations can only be ruled out by means of longitudinal studies, where meditators are followed over a certain period of time and changes – in this case changes to brain morphology – are measured over time. To make sure that these changes really result from meditation practice, ideally also a control group of participants engaging in a different activity (for example relaxation exercises) would be measured in the same way.

This is exactly what has been done in a study carried out by scientists in China and the US. Yi-Yuan Tang and co-workers recently published a study in the journal Proceedings of the National Academy of Sciences. The scientists used a relatively new technology called diffusion tensor imaging, or short DTI, to investigate changes to the white matter of the brain as a result of only four weeks of meditation practice.

DTI is based on magnetic resonance imaging (MRI) and allows delineating white matter fibres in the brain. For all who have to brush up their knowledge on brain physiology; generally the central nervous system (the brain is a part of it) is considered to consist of grey matter and white matter. The grey matter mainly consists of neuronal cell bodies, whereas white matter primarily consists of myelinated axon tracts. With other words, white matter is made up of the neuronal, long range connections between the nerve cells. To the bare eye they appear white because of the myelin, the whitish, insulating sheath material that covers the axons and makes fast transmission of electrical signals across the brain possible.

DTI allows measuring the neuronal connections between different brain areas. In addition, it provides important detail-information, for instance regarding the direction of the long range connections in the brain, their myelination and axon morphology.

That’s a lot to digest for a non-neuroscientist! But how is all this related to meditation?

In the studies I am discussing here participants practiced a certain form of mindfulness meditation (actually Integrative Body-Mind Training – see more details on the principle author’s website) for four weeks and underwent DTI scans before, after two weeks and after four weeks. The same happened to the control group who engaged in relaxation training.

Initially, the authors found improvements in white matter integrity after four weeks of meditation training (Tang et al., 2010). These improvements were evident in brain areas involved in neural communication from and to the anterior cingulate cortex, a central area of the brain which is known to be involved in controlling cognition and emotion. Subsequently (Tang et al., 2012), the authors went on to analyse the underlying processes of change in more detail. After two weeks of practice significant changes were only detected for axon morphology, whereas other parameters of white matter integrity only improved significantly after four weeks of meditation practice.

In general terms, the results suggest that axonal morphology might be an early biomarker of white matter change, as it seems to precede other changes. Regarding the specifics of meditation practice, crucial changes were different to what has been found with other types of training or learning. Whereas usually mainly changes in the character of the myelin are observed, in meditators also the axon morphology, either relating to increases in axonal fibres or axonal calibre, where present. Such changes are typical for brain development during childhood but so far have not been reported for learning or training studies.

It is still early days for this type of studies, but one may speculate that meditation practice differs from other forms of training and that the enhanced integrity of white matter fibres may be due to increased numbers of brain fibres or their increased axonal calibre. Because of an already established link between serotonin and axonal morphology, the authors furthermore speculate that improvements in emotional functions may drive the observed white matter changes. This seems a possible explanation, given that higher levels of emotional improvements after two weeks were related to larger increases on axonal morphology.

It is exciting to see that with new technologies like DTI it is possible to trace rather fine details of morphological changes in the brain. Furthermore, the study also highlights the importance of interconnections and interactions between brain areas when considering neuronal processes. 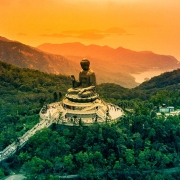