Blog
You are here: Home / Blog / Meditation / Mindfulness meditation – How does it work? Part Two

In a recent post I introduced a theoretical paper that outlines how mindfulness meditation works. Britta Hölzel and co-workers explain the assumed mechanisms that underpin the beneficial effects of mindfulness practice . Here I would like to offer a few more ideas that arose when reading this interesting paper. 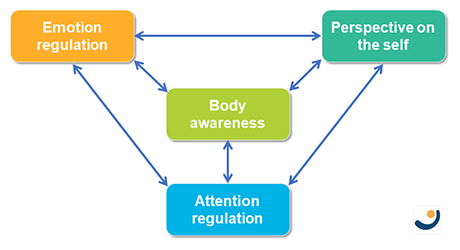 A theoretical perspective of mechanisms of mindfulness

The authors developed the presented model on theoretical grounds and – to a varying degree – underpin the four main model components with supporting empirical evidence. This evidence is treated in a rather coarse way, not distinguishing between different forms of meditation practice or intervention programmes and also not between studies that show direct evidence and others that are more indirect.

As the aim of the paper is to outline a theoretical model to be tested, rather than to make solid claims regarding the empirical support of every aspect of the model, this more general approach seems reasonable and a good way forward.

Furthermore, the model spells out some details that other discussions of the mechanisms underlying mindfulness practice have merely implied. It thus opens the door to more rigorous testing of these mechanisms.

Does it tell us how mindfulness meditation works?

So, does this paper fully answer the question how mindfulness meditation works? No, it does not! – But it also does not claim to do so. It rather provides a framework that may make it easier to position future research. Furthermore, it highlights the importance of considering various active components at the same time, rather than focusing on one particular detail.

The authors see the strength of their work in providing a model that considers mindfulness meditation practice as a process of enhanced self-regulation, consisting of the interplay of attention regulation, body awareness, emotion regulation (in form of reappraisal and extinction) and in a change of perspective regarding the self. While each of these components has previously been implicated in mindfulness practice, this model is the first to pull it all together in this way.

There is still much work to do and many questions are currently unanswered, for instance:

The list of questions could be much longer. But I will leave it at that.

So, this theoretical paper is a must read for everyone interested in how mindfulness meditation may lead to benefits, in particular for meditation researchers. It gives some important impulses for future research and waits to be refined and developed further.

Mindfulness meditation – How does it work?