This post includes several systematic reviews and meta-analyses. Two of them aggregated evidence about the influence of mindfulness meditation on different cognitive functions, one focuses in particular on reducing burnout in physicians, while the last one zooms in on heart rate variability, a psychophysiological parameter that might be an important indicator for meditation.

A ranomised active controlled study investigates the effect of mindfulness meditation on cognitive function and brain structure in adults with mild cognitive impairment. Another paper offers a long anticipated, improved approach to measuring dispositional mindfulness. And, finally, one study about “pathways to mindfulness” aimed to gather a representative estimate how people in Great Britain learn mindfulness meditation.

This meta-analysis focused on randomised controlled trials of mindfulness-based interventions in healthy adults and found evidence for improved attention and executive control, both with small effect sizes. No significant influence on working memory was found. Further analysis revealed the number of training sessions was an important predictor (a so-called moderator): the more sessions a programme had, the stronger the effect was. In contrast, the total hours of the intervention did not show such moderating influence. Surprised by the latter finding that the dosage did not influence outcomes, the authors suggest that participant motivation may need to be considered. They also discuss why the effect sizes they found were smaller than reported in previous meta-analyses and consider that age of the participants, and their mental health status may play a role, in that effects tend to be stronger in younger and older participants and in those taking part to address a mental health condition.

This meta-analysis scrutinised attentional mechanisms of “attention-based meditations”, meditations that use focused attention (FA) or open monitoring (OM) techniques (or both), thus broadly speaking mindfulness meditation practices. They classified the outcome measures according to two prominent models of attention and executive control, namely Posner’s attentional network model with alerting, orienting and executive control functions and Miyake’s model that subdivides executive control into the three facets inhibition, shifting, and updating. Their results show that generalised attention improved, and more specifically the functions of alerting, executive control, inhibition and updating functions improved, all with small effect sizes (Hedge’s g between 0.159 and 0.256). The analysis of potential differential effects did not yield significant differences. Practicing FA or OM meditation in isolation or in combination did not lead to selective attentional improvements. Interestingly, greater improvements were observed in tasks that are accuracy-based rather than relying on response speed.

This article will be of interest to anyone wishing to gain an overview of research into attention effects of mindfulness meditation. The important point is that it summarises research that does not build on complex mindfulness-based treatment programmes, but rather aims to isolate the specific meditation exercises. The included 87 studies are a rich source for gaining a good overview and a good starting point for digging deeper.

A good indicator for the quality of this meta-analysis is that it was pre-registered with Prospero (reg. #: CRD42019133077; https://doi.org/10.1136/bmjopen-2019-032295). This means that the authors declared and registered their analysis approach in advance, thus demonstrating maximum transparency.

In total, 25 studies involving 925 physicians were included. Overall, small effect sizes for reductions in stress and burnout were found, which were maintained for more than 5 months after the intervention. Established MBIs, such as MBSR and MBST, or adaptations of these, were more effective in reducing stress than other forms of MBIs or the mindfulness app Headspace. The authors also expressed concern about the quality of the available studies, highlighting the “low to very low” quality of evidence.

We read a lot about the positive effects of mindfulness-based approaches. Nevertheless, the field is still held back by a limited understanding how these changes come about. Often, investigating underlying mechanisms relies on self-report, usually in the form of questionnaires, or it relies on investigating the effects of mindfulness practices by means of different laboratory tasks, such as attention performance tests etc. In recent years focus expanded to also consider physiological changes. Here, Heart Rate Variability (HRV) has come into the focus of attention. HRV is a marker of autonomic nervous system function and has been linked to both physical and mental health.

This meta-analysis synthesised the evidence from 19 randomised controlled trials that studied whether mindfulness and meditation-based interventions (MBIs) are associated with improvements in HRV. While there was a tendency for small effect, this effect was not significant. The authors report a high heterogeneity in the results and also emphasise some methodological limitations, in particular that most studies did not control for respiration rate, although it is known to influence HRV. Many meta-analyses ask for more, and better research and so does this one. In this case two conclusions are important. First, that the evidence is currently not strong enough to claim that mindfulness meditation would influence HRV and second that in particular when it comes to studying physiological parameters such as HRV great care need to be taken to control for various influences, such as – for example – breathing rate.

Research into the potential cognitive benefits of meditation for older adults and for people with mild cognitive impairments has been ongoing for a while, including our own research on this topic [Malinowski & Shalamanova, 2017; Malinowski et al, 2017]. Here is one more study (of still just a few randomised active controlled trials) that investigated whether mindfulness meditation can enhance cognitive abilities in older adults with mild cognitive impairment (MCI). The study focused on outcomes from cognitive testing and a measure of neural structure, namely cortical thickness.

The study set a mindfulness-based programme for older adults against a health education program as active control condition. The main intervention phase was 3 months long, with 12 group sessions, followed by a 6-month phase, with one group session per month. The mindfulness programme included five main successive steps:

After the 9-month period, mindfulness-related gains in working memory span and divided attention were observed and also increased cortical thickness in the frontal pole of the right hemisphere, while cortical thickness in the left anterior cingulate was decreased. Other changes were observed after 3 months but not maintained after 9 months. And yet some other cognitive tests did not show mindfulness-related improvements at all.

I have been waiting for this publication for a while. Some readers may remember that I highlighted the pre-publication version of this article. Now it is published in Mindfulness. What is it about?

The Balanced Inventory of Mindfulness-Related Skills (BIMS) is a refined version of the most widely used mindfulness questionnaire, the Five-Facet Mindfulness Questionnaire (FFMQ). This refinement mitigates an important issue with the FFMQ, the so-called method effect.

In brief, it concerns the way how questionnaire items are usually phrased, and what response options are given to participants. Similar to most questionnaires used in psychological research, the FFMQ includes directional statements that are either positively or negatively worded. Participants are asked how frequently each statement is true, from “never or rarely true” to “very often or always true” (see example below). The BIMS overcomes this disbalance that is introduced by directional wording. It juxtaposes positively and negatively worded statements of the same item, thus providing a balanced statement.

The BIMS still captures the five sub-scales or facets of mindfulness skills of the FFMQ, but has only 27 instead of 39 items.

You can find a more detailed description of the BIMS in our Knowledge Base.

Example item from the FFMQ:

Let’s have a look at one example, one item from the “non-reacting“ facet of the “standard” FFMQ:

“I watch my feelings without getting lost in them.”

And participants choose one out of five possible responses on a Likert Scale:

The balanced approach of the BIMS assesses the same experience in the following way. For the whole questionnaire participants are instructed:

This example demonstrates the balanced approach of the BIMS: Rather than having positively or negatively worded items that can be endorsed or rejected more or less strongly, a potential positive or negative bias is avoided by stating both poles and allowing participants to indicate whether they tend more to one or the other pole.

This validation study showed convincingly that the BIMS can be a good alternative to the standard FFMQ. With 27 items it is also shorter than the main 39-item FFMQ and not significantly longer than the best-established short forms. As expected from rigorous and reflective mindfulness researchers like Van Dam, the authors emphasise that broader measurement issues that limit the FFMQ and other mindfulness questionnaires are not overcome by the BIMS. There are still issues with validity, i.e. whether the construct mindfulness is measured (BIMS and FFMQ aim to measure skills associated with mindfulness, rather than mindfulness itself) and whether it captures the understanding of mindfulness in traditional Buddhist contexts. Also, different ways how social desirability may influence how participants respond have not been resolved. Finally, the authors also emphasise that only the 5 subscales of the BIMS, namely observing, describing, acting with awareness, non-judging, and nonreactivity.

Other perspectives on meditation and mindfulness

I thought this study is worth mentioning, too. The authors aimed to get a sense how widely mindfulness is known and practiced in Great Britain. The data were collected via an online survey that run in November 2018.

When considering more closely how respondents had learned about mindfulness it turned out that mindfulness apps and books were the most common ways. The full breakdown is given in the figure below. 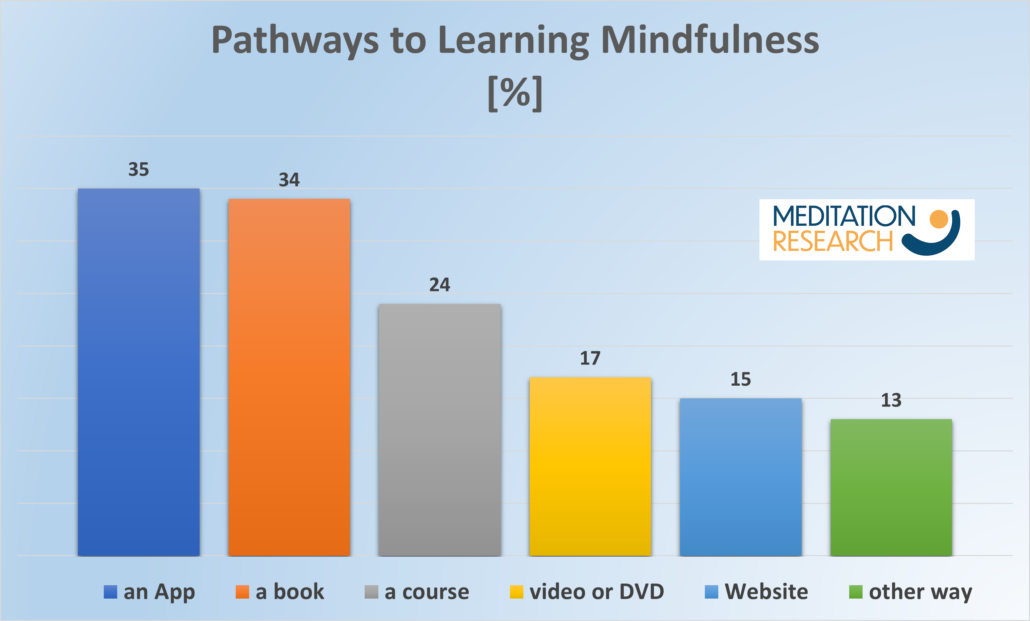 How people learned practising mindfulness meditation. Percentages add to more than 100% because multiple responses were possible.

The article breaks down knowledge about and engagement with mindfulness by age, gender, political views, income etc. If you are interested in such issues, I would recommend taking a closer look at the data presented in the article. To my knowledge, it offers the best estimate of mindfulness knowledge and usage in Great Britain. Although the sample size appears relatively small, it is in line with typical opinion polls. In addition, the sample has been weighted to be representative of the adult population of Great Britain. It should thus give a relatively reliable estimate for the whole adult population in Great Britain.

Can meditation lead to harm?