Before going into the details, here my list of the five best mindfulness questionnaires:

What are mindfulness questionnaires?

Mindfulness questionnaires aim to estimate how mindful an individual is by asking respondents to rate to what extent different mindfulness-related statements apply to them, whether they agree with these statements or how often they experience a mental state described by these statements.

Respondents are usually asked to indicate their response by choosing from several options on a so-called Likert scale (pronounced  like “Lick urt”). These Likert scales allow converting responses into numerical values that can, in turn, be subjected to statistical analysis. For instance, if a questionnaire asks about the frequency of an experience, response options and related scores may be:

For a questionnaire to make sense, the different statements – or questionnaire items – need to reflect the construct or variable they are supposed to measure, in this case mindfulness. Usually, they do so indirectly. Rather than asking directly “How mindful are you?”, items probe experiences and behaviours that are thought to be an expression of mindfulness, or the lack of it. This means that based on the questionnaire responses researchers infer how mindful someone is, expressed as a numerical value. Accordingly, in the context of questionnaire research, mindfulness is called a latent variable or a latent construct, rather than something that is directly observed. The questionnaire items are called indicators.

To offer an example, the figure below shows the five indicators for the “non-reactivity” subscale of the FFMQ-SF. 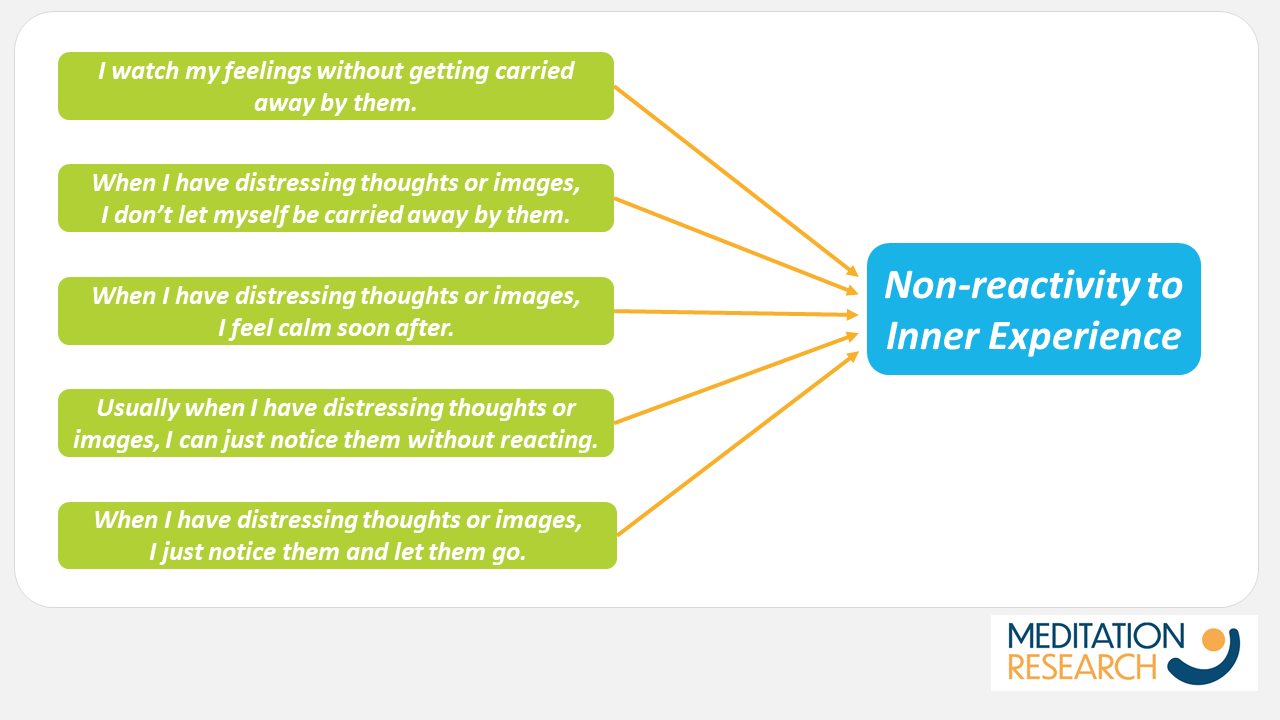 Mindfulness as trait or disposition

Most frequently, mindfulness questionnaires are  used to measure mindfulness as a trait, or disposition. Mindfulness is considered to be relatively stable aspects of an individual, sometimes also called ‘dispositional mindfulness’. In this sense, it is comparable to other stable psychological traits, such as the widely researched main five personality traits: Openness,  Conscientiousness, Extraversion, Agreeableness, and Neuroticism.

The importance of measuring mindfulness

Why do we use questionnaires to measure mindfulness?

Science aims to be as objective as possible, with as little subjectivity as possible. To ensure objectivity, we would – ideally – prefer to not ask the subjects of our studies, the study participants. But there is no way around this subjective approach. However imperfect, it is the only way of gaining access to the experience of a person. We cannot see from outside how mindful someone is. We cannot just measure the brain activity of a participant to determine their levels of mindfulness. Somehow, when it comes to human experience, there is no way around asking participants.

The questionnaire approach, whether it is about mindfulness or anything else, has limitations. The answers participants give are necessarily subjective – we ask the participant to evaluate their experience – and in many cases respondents may not be fully aware of their experiences, they may have certain biases or may be inclined to answer in line with the expectations of the researchers. Also, respondents may understand and interpret questions in different ways. The latter is of particular concern for mindfulness questionnaires.

Indeed, research has shown that meditators and non-meditators understand the same mindfulness questions in different ways and may also evaluate their own experience in different ways. After all, to estimate how mindful I am, requires a certain degree of mindfulness. And a common impression of people who start engaging in meditation practice is that they seem to experience more distraction, that their mental states have become more unruly than they were before starting to meditate. In many cases this experience is a result of increasing awareness of one’s own mental states. Before one just did not recognise how unruly the mind is, because one did not focus on it.

This phenomenon is of particular concern when using mindfulness questionnaires for tracking meditation progress. When responding to questions about one’s own mental processes repeatedly, while the awareness of these processes changes, means that responses given at different time points cannot easily be compared.

Criteria for determining the quality of mindfulness questionnaires

how reliable the questionnaire is as a measurement tool. Put simply, if we assume that a person has a fixed level of mindfulness, would the questionnaire always give the same reading? Think about a bathroom scale: For as long as my weight does not change, I would expect that the scale shows the same value each time I step on it. If it does not, the scale would have low reliability.

Once a questionnaire is well-established (e.g. has good reliability and validity), it can be useful to accumulate normative data. These normative data are obtained from a representative sample of the population of interest. These data are then used to establish norms that indicate how people usually respond, or how the answers from one individual relate to the general population. Only when we have such normative data for a specific questionnaire it is possible to interpret responses for individual respondents. For instance, we would be able to answer the question whether a person is more mindfulness than the general population, or less mindful. At the moment (July 2020), there are no normative data for any of the mindfulness questionnaires.

What are the five best mindfulness questionnaires?

I considered the above quality criteria and a range of studies that investigated the quality of the questionnaires, sometimes with head-to-head comparisons, to arrive at my final list. So here are the five questionnaires that made the cut.

No 1: The Five-Facet Mindfulness Questionnaire

There is growing evidence that the ‘observing’ sub-scale is not fit for purpose. Accordingly, you may want to exclude this facet. Its properties are not great. Importantly, it appears that the ‘observing items’ are interpreted differently by meditators and non-meditators. If you want to track how mindfulness develops when beginners start engaging with mindfulness meditation (e.g. before and after an MBSR course), this will be problematic.

No 2: The Freiburg Mindfulness Inventory (FMI)

If you are interested in using the trait and state version of the same questionnaire, the TMS may be a good choice.

Questionnaires that did not make the cut

But as some of you may be surprised that the Mindful Attention Awareness Scale (MAAS), developed by Brown and Ryan (2003), is not on the list, a few words about this popular questionnaire. As I explained in a Knowledge Base entry, and in line with several other researchers, the MAAS is not well suited as a complete mindfulness measure because it only captures one aspect of mindfulness (the attention aspect of awareness) and, by design omits the attitudinal component. Brown and Ryan clearly state:

“The MAAS is focused on the presence or absence of attention to and awareness of what is occurring in the present rather than on attributes such as acceptance, trust, empathy, gratitude, or the various others that have been associated with mindfulness.” (Brown & Ryan, 2003, p. 826)

Developments to watch out for

Scholarly work to improve the quality of mindfulness questionnaires is ongoing and it is certain that we have not yet arrived at the best ways of measuring mindfulness. we may thus cast our eyes forward to a few promising developments.

Nicholas van Dam, working at the University of Melbourne, is spearheading the development of the Balanced Inventory of Mindfulness-Related Skills (BIMS). The BIMS is seen as an improvement on the FFMQ. The authors revised the content of some FFMQ items and changed how the participants need to respond: In the structured alternative response format, participants rate which of two alternative statements is more like them, and to what extent it is so.

This looks like promising work and I will keep a close eye on how this develops.

The concept of decentering is gaining traction. In a recent review, Bernstein et al (2015) describes it as the mental state where a person relates to their own subjective experience of the world as a “third-person observer”. They see decentering as the inherently human capacity to shift the experiential perspective from being engrossed to being a “neutral” observer.

Within the influential Intention-Attention-Attitude model of mindfulness, the main result of mindfulness meditation is described as reperceiving (Shapiro et al, 2006), a construct closely aligned with decentering. Currently, the Experiences Questionnaire by Fresco et al (2007) is the prime questionnaire for assessing decentering. As summarised in Bernstein et al. (2019), several new developments for measuring decentering are under way.

The Breath Counting Task is a recently developed “behavioural tool” that aims to measure mindfulness without having to use a questionnaire. (Levinson et al, 2014).  During this task, participants are asked to count their breaths from 1 to 8 and press one button for each breath. On  the ninth breath they are to press another button. In addition, they were instructed to press a further button to indicate that they lost count, so-called self-caught miscounting, and then to restart the counting with the next breath.

Some initial studies confirm that the skill in breath counting may be a good behavioural measure of mindfulness. Currently more research, including our own, is ongoing to establish how useful this new tool might be.

Rather than asking participants to look or think back and make a retrospective evaluation of their experience and behaviour, experience sampling methodology makes use of smartphones (in the old days also pagers, notebooks and similar devices). Participants are prompted at quasi-random times to answer a few questions about their current experience. In terms of assessing mindfulness, this approach is still in its infancy, but some interesting developments, including our own research, are on their way.